For a better experience please update your browser.

Your browser must have cookies enabled otherwise you will not be able to login or register. Please enable cookies in your browser and then refresh the page to continue.

Total booking fees comprise charges for IT services, credit card charges and/or other administrative fees allocated by the event organiser

An important statement regarding this Saturday at Gatecrasher Birmingham.

Dance music in the second decade of 2000 is about one word – BIG. The tracks and remixes are big, the new breed of big room DJs are akin to demigods and live events have reached a scale never before seen. However the global sensation and penetration of dance music into top 40 radio would not have been possible without a foundation built by David Morales– one of the first true superstar DJs.

Few DJs and producers have had such an impact on the shape of house music as David Morales. From his first house parties to seminal clubs like the Paradise Garage or Red Zone, David displayed an uncanny knack for understanding what moves the floor at an early age. David has lent his golden touch to artists across the board and single-handedly re-invented the remix, with Grammy-winning re-productions for Mariah Carey, Michael Jackson and more. Drawing from disco, soul, hip hop, latin, dub, and house for his own sound, David reflects the colourful melting pot of dancefloors worldwide, and continues to work with the new generation of artists making today’s crossover sounds.

Todd Terry is one of the quintessential NYC dance music producers – for more than 25 years. Born in Brooklyn, Todd Terry is as much New York as it gets. Blessed with the instinct, aesthetic and freedom that comes with hip hop, he created a unique brand of house music. Heavy on the sample tip and always aimed directly at the dancefloor, his earliest records like Bango, A Day In The Life or Can You Party set the parameters for his musical universe. Graced with an unmistakable sound signature, the house sound of Todd Terry is one of the essential reference points of this music – you just know a Todd Terry beat when you hear it. Citing classic disco, rock or funk records throughout his works, Terry’s tracks were as much in favour with US-American DJ heavyweights like Tony Humphries as they were with the hyped-up club music crowds on the UK island. Todd Terry’s effectiveness spread further through his several aliases like Gypsymen or CLS, and records like Jungle Brothers’ seminal I’ll House You, his classic chart-topping remix for Everything But The Girl’s Missing, and his very own version of Keep On Jumpin’. His labels TNT and Freeze released a nitty-gritty range from vocal house to hip hop instrumentals and disco cut-ups, as well as his infamous Unreleased Projects.

Harry Choo Choo Romero is widely regarded as some of the groundbreaking Latin house artists of all time .The Run-DMC inspired Choo Choo (the train conductor’s cap worn since childhood may have something to do with the nickname) felt the impact of the Latin-freestyle movement in the 80s, and jump-started his career as a DJ with a high-voltage performance at a New Jersey dance club. From there, he was taken under the wing of Millennium Music, a management company and production team. Harry worked with their label, Gossip Records (distributed by Strictly Rhythm), creating demos and gathering some useful industry-related knowledge.Part of what the future was to hold was Harry’s decision to join forces with Erick Morillo and his now internationally famed label, Subliminal Records. Along with Morillo and producer/DJ Jose Nunez, Harry played a definitive role in laying the foundation for what has come to be the highest quality dance music label.

Contact us on 0121 633 1520 or email info@gatecrasherBirmingham.co.uk for more information. 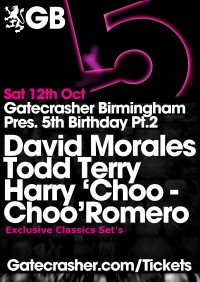